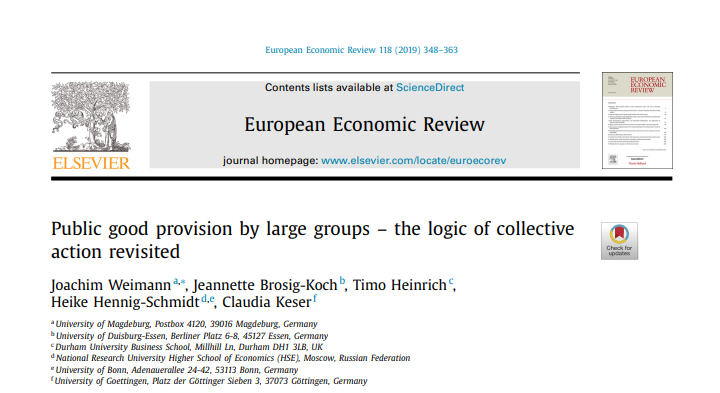 Abstract: The organization of collective action is extremely important for societies. The main reason is that many of the key problems societies face are public good problems. We present results from a series of laboratory experiments with large groups of up to 100 subjects. Our results demonstrate that large groups, in which the impact of an individual contribution ( MPCR ) is almost negligible, are able to provide a public good in the same way as small groups in which the impact of an individual contribution is much higher. Nevertheless, we find that small variations in MPCR in large groups have a strong effect on contributions. We develop a hypothesis concerning the interplay between MPCR and group size, which is based on the assumption that the salience of the advantages of mutual cooperation plays a decisive role. This hypothesis is successfully tested in the second series of experiments. Since Mancur Olson’s “Logic of collective action, ” it is a commonly held belief that in large groups the prospects of a successful organization of collective actions are rather bad. Our results, however, suggest that the chance to successfully organize collective action of large groups and to solve important public good problems is much higher than previously thought.

About
International Laboratory for Experimental and Behavioural Economics